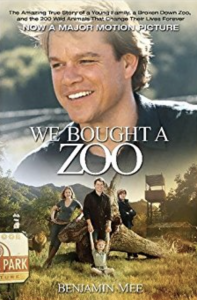 In the 2011 Cameron Crow film We Bought A Zoo, Matt Damon’s character has lived a (challenging) life with one credo: “All it takes is 20-seconds of insane courage!” And that’s the one line in the script that has stayed with me long after the film met it’s demise—simply because that line is so incredibly potent.

I think about that line when I hear the stories of people doing courageous acts of heroism.

I think about that line especially when I’m confronted with a risky decision or a challenging choice.

I think about that line every time resistance and procrastination stand between me and doing the right thing.

I think about that line just before I have to admit I was wrong, made a mistake, or really screwed up.

Important because I know takes a courageous character to choose the life of an artist or entrepreneur, especially when you know the paycheck may not be equal to your talent, and your best work may be rejected. However, I have learned that when that moment of “do or die” finally arrives, all I really need is 20-seconds of insane courage to mute my inner critic, knock fear on its ass, and send uncertainty scream’n for the door!