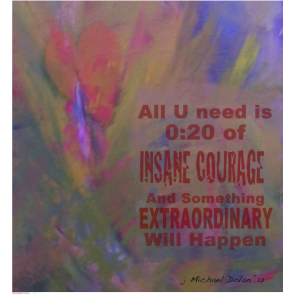 In the Cameron Crow film We Bought A Zoo, Matt Damon’s character has lived a (challenging) life with one credo: “All it takes is 20-Seconds of Insane Courage.” And that’s the one line in the script that stayed with me long after I left the theater, because it’s so incredibly potent.

Entrepreneurs need to drum up 20-seconds of insane courage just before they launch a new product or offer a new service to their customers. Composers need it just before they hand over the final film score to an anticipating director. A writer needs that same courage when he submits the final manuscript (after months of re-writes), and photographers, painters and designers need it when they’re about to present their completed work. An actor certainly needs courage when she reads in front of a critical casting group (especially at the final “call back”), and we all need that 20-seconds of insane courage just before we have to admit we were wrong, made a mistake, or really screwed up.

It takes a courageous character to “choose” the life of an artist or entrepreneur, especially when you know the paycheck may not be steady and your best creative work may be rejected. However, the truth is, when that moment of “do or die” finally arrives, all we really need is 20-Seconds of Insane Courage to knock fear on its ass and send uncertainty scream’n for the exit!

Anyone can muster up 20-Seconds of insane courage, right?