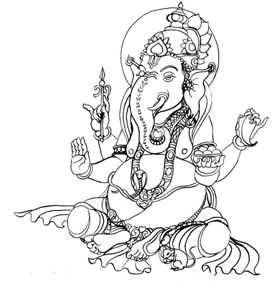 As the story goes, the musician was down on his knees begging God for help:
“Oh, God you gotta help me get this gig at the House of Blues. It means everything to me. If I don’t get this gig at the House of Blues, I will have to quit my career as a musician and take that office job. And you know how I HATE computers! Oh God, if you can just get me this one show at the House of Blues, I promise I’ll go to church every Sunday, stop cheat’n on my wife and give up drugs…I promise Lord.” Just then the phone rang and his agent informed him that the HOB gig is not going to happen. However, he got him booked at the Hollywood Bowl, opening for a benefit concert for diabetes, featuring Tom Petty, John Mellencamp and Sheryl Crow! The musician quickly composed himself and said, “never mind God, I just got a much better gig, thanks anyway!”

In the Hindu philosophy the great mythical elephant god, Lord Ganesha is the creator and destroyer of obstacles. Ganesh always works in strange ways, often closing the door to what we think we want for ourselves, and opening the door to what is best for everyone involved.