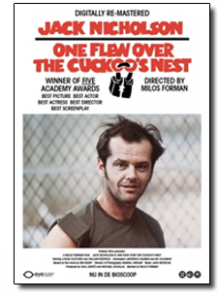 “I mean—hell, I’m surprised how sane you guys all are. As near as I can tell you’re not any crazier than the average asshole on the street!” —Jack Nicholson’s character rants on the other patients in the ward.

There’s a reason you like hanging out with the other crazies in the ward, it’s because you’re nuts too! You’re crazy because of that free-flowing, non-stop stream of ideas, brainstorms, videos, melodies, rhymes, beats, money-making schemes and bright ideas that flow in directly from the divine ethos and invade the sacred space between your ears. It’s a constant download of creative inspiration that has never stopped and never will! Others don’t have it. In fact, others often see you as scattered, unfocused and pensive. That’s because they don’t get it! They’re the ones who ask: “Where did you get that great idea?” How did you come up with those lyrics?” What possessed you to start that project?” “What makes you think you can change the world?” You’re nuts because while others struggle for the right answers, you’re content living in a world of endless possibilities, and people just don’t get that. Not even your therapist gets it—unless she’s crazy too! Truth is, only other crazy artists & entrepreneurs really understand what it’s like to be an independent, creative, risk-taker. That’s why we love talking, sharing, arguing and hanging with other A&E’s. There’s a common camaraderie there. It feels like “home” when we’re in the company of other crazy artists & treps. So admit it—you’re nuts! Stop questioning and doubting your sanity, and finally give yourself permission to be the crazy creative genius that you are—no matter what others think!

* Ripped off, rewritten and plagiarized from a blog I wrote a few years back.