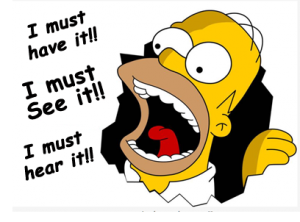 In 1984 someone walked into my office and asked if he could leave his Macintosh with me for a couple of weeks. He was an independent salesman, repping Apple products from his home. He said if I liked it he would sell me a new one for less than I would pay at a retail store. If I didn’t like it, he would just take it back at no charge. Sounded good to me, so I went for it. Before he left, all he did was show me how to turn it on, and gave me a quick demo of a crazy little thing called a “mouse.” When he returned after three weeks I bought four Mac computers: one for me, one for my partner Eric, one for our art director and one for our VP of sales. Remember, the “promo hook” they used back then was “Desktop Publishing.” So, being a publisher, I was very intrigued at the notion of producing our products faster, better and cheaper. I’ve been an Apple devotee ever since.

HOWEVER;
Just because I love Steve Jobs, just because I love apple products, just because I have confidence in Tim Cook, doesn’t mean I’m going to run out and buy the new iPhone 5s. My most current iPhone is working fine. It syncs with my iPad, desktop and laptop, floats every bit of my data in and out of the cloud, and runs every app & software program I need, seamlessly and effortlessly. I like to upgrade (hardware) when something is so unique, so over-the-top, so jaw dropping that I can’t live or work without it. That’s when I shell out. When it’s must-have, must-see, must-hear, must-do, I’ll be at the front of the line with my wallet open.

It’s the “end product” that counts. It’s what you ultimately produce, it’s what you finally release, publish, launch or ship that may or may not provoke us to lay down the bucks for the privilege of ownership.

If you expect your devoted tribe to respond with likes, comments, follows and friends, then give them “what ever you’ve got.”

We may be your devoted loving fans forever, but if you want us to fork over the bucks, give us something that we must-have, must-see, must-hear, must-do!