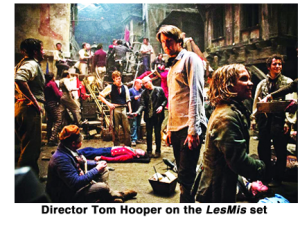 Back in the day I had the opportunity to work on many TV and movie locations. And even though I “made my bones” in the music biz, I’ve always had a profound love, and a mountain of respect for the challenging movie making process. It’s a brave endeavor indeed to commit your time and talent to a project that could easily make or break your career in the first week of release. I also think it’s the epitome of synchronicity when a great crew is brought together with great actors, great directors, great composers and great screenwriters to tell a story worth telling. A story that leaves us contemplating the past, anticipating the future, and questioning and doubting whether we’ve made brave choices in our life, or just easy, simple ones. That’s why I love Les Miserables. It got me wondering if I’m making truly brave choices in my life. And no one was braver in that cast & crew than the director Tom Hooper. I was so impressed with the fact that even in the face of so much resistance from the investors, producers and actors, Hooper chose to have the actors sing while acting, (no lip-syncing). Not because he thought it would make good “box office,” on the contrary, simply because he thought it was the right thing to do—that it would expel bravery from the actors, and bring more passion and pathos to their performance. I thought that was such a brave risky move, for such a successful director. I’m sure you’ve seen it by now and have your own opinion, and I could rant on and on, however there was one line of dialog in the script, that really stuck with me and I thought I’d share it with you:

“There is a determined though unseen bravery that defends itself foot by foot in the darkness against the fatal invasions of necessity and dishonesty. Noble and mysterious triumphs that no eye sees, and no fame rewards, and no flourish of triumph salutes. Life, misfortunes, isolation, abandonment, poverty, are battlefields that have their heroes; obscure heroes, who are most often greater than the illustrious famous ones.” ― Victor Hugo, Les Miserables