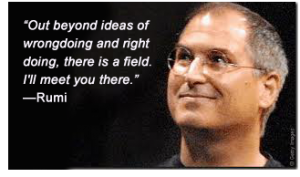 As I write this note on my iPad, I’m stuck for the words to properly acknowledge Steve Jobs. For the past 24 hours, so many have said it much better than I ever could. I’ve been slower today, quieter. Like when Lennon and George left. I began the day at 4 am with a longer than usual meditation and it’s now 4:30 pm (pst), and it feels like I haven’t yet left that space of deep silence. Steve Jobs was one of my greatest gurus, a teacher in so many ways. I read almost everything he wrote and have seen almost every one of his presentations (not to mention gave him most of my hard earned cash). He epitomized and cast in stone the true meaning of what it is to be an artist & entrepreneur. He made such an impact on my life, and my business (and so many billions of others around the world) that the only way I (we) can truly honor the man is to attempt to follow one of his greatest and most popular teachings:

“Why Join The Navy If You Can Be A Pirate?” —Steve Jobs