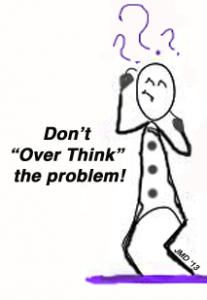 You KNOW before you KNOW. Malcolm Gladwell calls it a “Blink:” The fact that you KNOW the truth the instant it arrives on the scene. Doesn’t matter if it’s which agent to sign with, what web person to hire, how much $$ to invest, what songs to keep on the record, how to market your book, when to launch your video, or when to start chipping away at your dream project. You already know the answer. However, if you’re attached to the outcome, or you “over think” the problem you can easily get “spaced” in the shadow of doubt, frozen in the fear of making the wrong choice or dogged by a lack of confidence. I’ve seen it so many times in the smartest CEO’s and the most talented artists. To the degree that you can let go of the way “it has to be,” and remain open to the quantum field of ALL possibilities, to that degree the truth will bubble up and reveal itself. Make sense? When in doubt, even in the face of popular opinion, follow what you KNOW to be the truth, which is usually the first option that bubbled up in the first place.