The Fish And The Dog 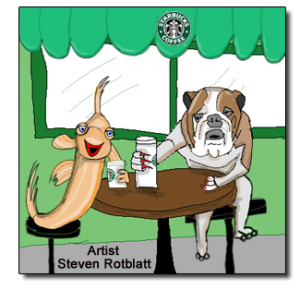 Although I prefer Coffee Bean, this day I was sitting alone at Starbucks on the outdoor patio, enjoying the people watching and sipping a frothy iced chai latte—while the awesome wife was shopping for cute shoes next door.

This particular Starbucks was extremely crowded with its eclectic mix of artists & entrepreneurs, and I was sitting nearly shoulder to shoulder beside two animated characters. One was an extremely handsome Bulldog and the other was a beautiful Fan-Tail Goldfish. As it turned out, both the fish and the dog were exceptionally talented creative geniuses, with big plans, impossible dreams, and much to contribute. As I leaned in to eavesdrop, I heard the fish talking about her fear of failure, and her uncertainty about the future. She added that she wakes up in the morning to hesitation and doubt.

The dog also talked about his fear of failure, and waking up in the morning to hesitation and doubt. He also added that he’s fearful of making wrong choices, reluctant to make any changes, and unwilling to take any big risks that would threaten his lean bank account.

As I continued to stretch my ear closer to their table, it became very clear to me that although the fish was aware that the resistance is strong and the doubts are convincing, she also knows that in order to succeed and manifest her big dreams, she needs to be a fully confident and committed participant in the game. So she finished her morning latte, wished her dog friend good luck, and proceeded to her creative space, determined to do her best work.

The dog was also aware that the resistance is strong and the doubts are convincing. However, instead of moving forward, he paused and lagged behind. He permitted doubt to set his pace and distraction to steal his focus. So he ordered another Cappuccino and continued to ponder his plight.

After observing all this go down, it made me think that although both the fish and the dog were exceptionally talented creative geniuses, with big plans, impossible dreams, and much to contribute, only one was ruthlessly committed, only one has a chance of breaking through, only one of them is a pro.

I slurped the very last drop of frothy foam from my tasty chai latte, and met up with the awesome wife, who by that time was wearing the cutest shoes I’d ever seen.