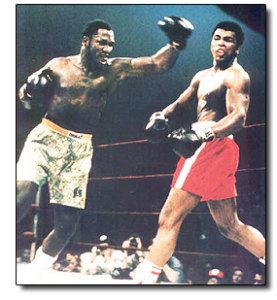 When it was clear that Smokin’ Joe Frazier had the upper hand on Muhammad AlI, manager Dundee tossed in the towel—a sign to the referee that Ali had quit the fight.

It takes experience and wisdom to realize when a particular project has run its course. After that, it takes courage and confidence to tell the truth about it and pull the plug. So what your ego takes a hit!

I don’t think it makes sense to wait until it’s too late to “toss the towel.” Taking an “unnecessary” beating; whether it’s financial, personal, or creative, could result in eliminating you from the game indefinitely, and that would not be good.

And while “never quit” may be the mantra, there are times when quitting is the only real intelligent thing to do to further your rise up the ladder. Be smart enough to know when it’s time to “towel toss,” so you can recover, regroup, reorganize, and get back in the ring.

Thanks to Steven Pressfield for his unwavering inspiration.