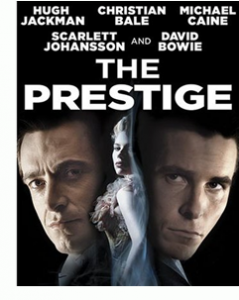 One of my favorite foreign films is the 2006 British release, The Prestige, starring David Bowie, Michael Cane, Hugh Jackman, Christian Bale and Scarlett Johansson. The film earned $14.8M on opening weekend in the U.S., debuting at #1, and ultimately soared to $109M thereafter. Here’s what I walked out of the theater with (besides the awesome wife):

The first act is called “The Pledge.” The magician shows you something ordinary, like a deck of cards or a top hat.

The second act is called “The Turn.” The magician takes the ordinary something and makes it do something extraordinary.

The third act is called “The Prestige.” Wala! The audience loves you, your fans adore you, and your customers become devotees.

In your world, “The Pledge” is over. You already put your cards on the table when you committed to a career of independence and creativity. “The Prestige” will happen when your extraordinary screenplay is “opted,” your contagious video goes viral, or your business is sold for 18-billion.

However the act you want to focus on is “The Turn.” That moment when you stun your fans, wow your customers, and amaze your followers by offering them the unexpected, something they weren’t anticipating, or something they didn’t know they needed. When you arrive at “The Turn” you’ve piqued their interest and won their trust enough to bring them to “The Prestige.”

“The Turn” can also be (broadly) thought of as a tipping point, or a turning point—a time in your life when the circumstances have dramatically changed so much that they alter the course of your entire world, and present uncommon opportunities and possibilities.