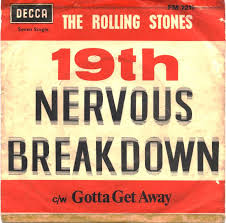 I have them too! And I’ve noticed that breakdowns and upsets are pretty much always a double-sided affair. On the outside, they’re an inevitable part of life, which manifest in many different forms at unpredictable times. On the inside they can often become a critical, “oh my god!” situation. That mix sets the stage for a crazy-thinking dynamic right from the start.

In closely observing my own challenges, I have noticed two distinct parts of a breakdown that tug & pull with equal strength:
1) The Dark Part: You become hypnotized, traumatized, stunned, stifled and stopped by the drama of the breakdown, and the words hopeless, miserable and confused begin to bounce around between your ears.
2) The Light Part: A strong desire to “get your groove back” and break through the breakdown, so you can get on with the task of building and maintaining a great career/life going forward.

When our attention and energy is primarily directed toward the dark part, we lose our power over the light part. Here’s how to get your power back:

First: Stand up on your own two feet and declare that a breakdown has occurred in your life! Say it out loud and stare at it right in the face! This process alone has power. Not like positive thinking, more like simply declaring the truth about what has been churning inside for too long.
Second: Plant the flag and make a ruthless commitment that come hell or high water you will get through this. Not like wishful thinking, more like taking a profound stand that “enough is enough!” That you are done living in the dark side of the breakdown.
Third: Get to work on fixing what is broken. You can do this. You have the intelligence to fix this. You have the inner wisdom to figure this out. You have the ability to “create” your way out of this breakdown. Stop being afraid of making the wrong move and start moving things around. That alone will get the balling rolling to the light side of the court.

Important because we do our best work when we’re on the field calling the next play and moving the ball forward. Not sitting on the sidelines wishing and wondering how to get back in the game. That said, when we begin to make those tough choices and decisions that we’ve been resisting and avoiding, that starts to move the ball. And once the ball gets rolling we start thinking clearer. And once that happens the breakdown itself begins to breakdown.