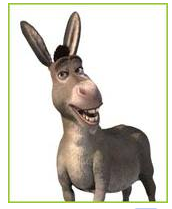 So we have this large back porch deck that’s completely covered with an open slat pergola. We wanted to get a few estimates on covering the top completely so we could enjoy the deck even in the rain (awesome wife’s idea). So I called a few contractors and gathered a few estimates. Ultimately one guy stood out from the rest. He proceeded to explain two different techniques to build the roof, along with two drastically different prices; really cheap and very expensive. Then I asked, “If this were your house, how would you do it?” He paused for a moment then replied, “Well, there’s the right way and the jackass way. If this were my house, I’d probably do it the jackass way first, then if that didn’t work I’d do it the right way…but that’s just me.” He saw a puzzled look on my face, then offered, “If you do it the jackass way it will probably not leak, but I won’t guarantee it. If you do it the right way I’ll guarantee it.” So I thought out loud, “gee it doesn’t rain that much in So.Cal…ok let’s try the jackass way!”

The job took about five days to complete and looked great. I paid the guy and the awesome wife went out and bought new patio furniture. Then, about six weeks later it rained. A good strong April shower too. Guess what? IT LEAKED! So I gave him a call, and he reminded me (with a smirk in his voice), “you had a clear choice from the beginning and you choose the jackass way!” Believe it or not, I like this guy, so he’s coming back next week to do it the right way.

Need I explain the deeper message here? We always have a clear choice to do it faster and cheaper, OR do it right the first time. Whether it’s a record, book, website or home improvement. And while amateurs are so excited to finish the project and tell all their Facebook friends, they usually miss the mark (that’s why they’re still amateurs). However the extraordinary artist and exceptional CEO will not be rushed. The professional will take however much time and money she needs to get it right…the FIRST time.