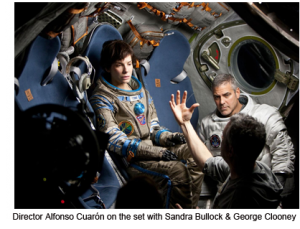 — It’s the invisible force that keeps us centered & grounded.
— It’s the irresistible attraction that keeps drawing us toward our impossible dreams.
— It’s our own personal “tug of truth” that is in constant battle with our relentless resistance.

The Movie:
I think showbiz artists & entrepreneurs will respect and appreciate this film more than the general public, simply because of your understanding of the creative process and the various challenges it takes to pull off such a production. However, as of this writing 10/19/13, it has already grossed $200M world wide since its 10/4/13 U.S. release, (it cost $100M to make). I’m impressed by the tremendous risk and $$$ that Kevin Spacy brought forth to “exec produce” this film. Here’s what hooked me>>>

— Only Two (Physical) Actors: Sandra Bullock and supporting actor, George Clooney. I wasn’t a big Sandra Bullock fan. I’m just a big fan of real life, hi-tech, computer-driven movies. However, I’m now a big Sandra Bullock fan. Her acting was such that she convinced me that she wasn’t Sandra Bullock, she was a real medical engineer/astronaut, sacred out of her wits. It was her acting alone that carried the entire movie—it had to, she was (almost) the only one in it!
Cool Fact: There are a few voiceover actors in this movie but a key voice part comes from Ed Harris, who is guiding the astronauts through space from Mission Control in Houston. It’s a particularly cheeky choice, since Harris played John Glenn in The Right Stuff and NASA flight director Gene Kranz in Apollo 13. He also played the “Christof” the god-like character in The Truman Show.

— Great Soundrack: Steven Prices’ score is so unique (reminiscent of Danny Elfman) that it’s hard to imagine the film working as well as it does without his creative composing. It’s also a good stand-alone album for background music while you’re putzing around the house. I listened to the entire album as I was writing this blog.

— Only One Set: The entire movie was shot on one set, using green screen, CGI and plenty of VFX.

— Great Special Effects: 80 percent of the film was hand-animated on an Apple computer. It’s a tightly shot film with a very small set. The special effects make us believe we are entrapped in the entire universe while at the same time experiencing its violent wrath. Director of Photography Emmanuel Lubezki invented a “light box” set made of 196 panels, each containing 4096 LEDs. The entire rig was 20 ft. tall and 10 ft. wide. Imagine yourself as Sandra Bullock, hanging on an intricate 12 ft. wire rig like a puppet, inside a small box made of flat-screen TV’s flickering light in your face. The UP-side? One of the TV’s was actually showing the scene to which Sandra was reacting to.

— Great Direction: Alfonso Cuaron had to convey his eccentric vision to his (two) actors, via drawings, miniatures, playbacks, and…well…plenty of (Spanish) hand gestures! There was no other outside action for the actors to react to.

— Great Script: Took five years from story idea to theatrical release. Cuaron co-wrote the screenplay with his thirty-year old son Jonas—this was the first collaboration between the two of them. It was Jonas’ idea. Truth is, it doesn’t get any more challenging for a writer then to create a believable dialog with only two characters, without boring us to sleep. Truth is, one of those characters ultimately carries ALL the dialog for 3/4 of the movie. Truth is, from what I’ve heard from actual “crew-talk” a lot of this script was re-written on the fly. In fact, Clooney contributed one of the movies major pivotal transitions. (It’s the scene that’s so unbelievable).

— Great Message: Never give up. Even if the odds are absolutely, positively against you and you only have a .0001% chance of making it, never give up on your big impossible dream. Follow your own personal “Tug of Truth” in the direction IT want’s to go.