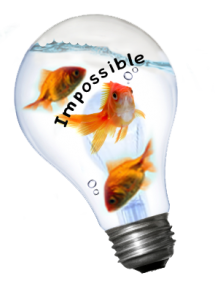 Looking for partners or investors for your new start-up or current showbiz venture? Make sure your idea is a BIG one. And then, just when you think it’s big enough, shove that great idea into the swimming pool of impossibility. During these exciting digital days, when the word “innovation” is on the tongue-tips of every venture capitalist on the street, it’s much easier to woo the interests of new partners, team members, big players and investors when you have an impossible vision, as opposed to just a good idea. There are thousands of good ideas, however there are too few impossible visions.

So long as that unimaginable vision is romantically worthwhile and fantastically impossible, I would argue that big players would be less likely to concern themselves with the smaller details and pride themselves in the possibility of being part of something huge—an impossible worthwhile project that could make a significant difference in the future well-being of the audience it serves.

These days when I consult with people and companies I’m always poking around for that impossible dream, that ridiculous idea that is so far out there it’s irresistible. Because I truly believe that to the degree you commit to a huge worthwhile, impossible project, one that really makes a difference, to that degree huge impossible opportunities will come your way, and huge impossible names will want to play with you.