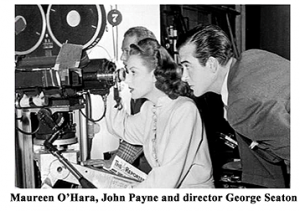 You may be burnt out on it but I’m a sap for this movie. I wrote about it in 2012 and after watching it again I was compelled to write about it now. I’m talking about the original “Miracle On 34th St.” released in 1947 with Oscar winner Edmund Gwenn as Kris Kringle. The film was written and directed by George Seaton, who won an Academy Award for best screenplay, and was also nominated for best director (and best film).

There are far too many sub plots in this movie to dissect them all, including the Macy’s head of personnel who goes beyond his scope, trying to pass as a psychologist—risky stuff in those days. But the most well written, persuasive character in this ensemble cast is not Santa, it’s John Payne’s character Fred Gaily. He’s the attorney who risks his law career by putting his reputation on the line, all because he’s really in love with Doris, and he has such compassion for o’l Kris Kringle. By taking on the “impossible” task of proving Kringle is the real Santa Claus, he definitely places in jeopardy his reputation as a respected attorney, and also puts at risk his relationship with Doris. Here’s a poignant excerpt from the original script:

Doris (Maureen O’Hara): You’re not really serious about this?

Gaily: (John Payne) Of course I am.

Gaily: Why? You saw Macy and Gimbal shaking hands. That wasn’t possible either, but it happened.

Doris: It’s completely idiotic. What do your bosses say?

Gaily: That either I drop this IMPOSSIBLE case or they will drop me.

Doris: I can’t believe you would risk everything to prove the IMPOSSIBLE…that there IS a Santa Claus!

Gaily: But no one else has the courage to stand up for Kris, and what he stands for!

Important because doing what’s obvious and ordinary provokes obvious and ordinary results. However, courageously stepping out on to the skinny branches and taking on the “impossible,” lifts us out of the box, where ALL possibilities exist. No less scary, just more opportunity. The wisdom of Fred Gaily (and studio chief Darryl Zanuck) tells us to be courageous, do what’s right, go for the impossible, and prove to us that you are who you say you are.

—This film itself was considered to be a long shot. However, Darryl Zanuck (head of 20th Century Fox) took a big risk and changed the release date from December to May, taking advantage of the summer season, rather than the cold winter when no one went to movies.

—The house shown at the end of the film is a 1703 square foot single family home built in 1943. It’s located at 24 Derby Road, Port Washington, New York. The home looks practically the same as it did in 1947, except that the roof line has been altered by the addition of a window.