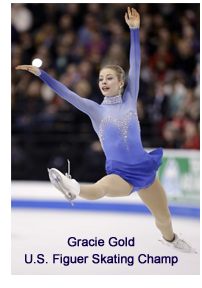 The awesome wife is hooked by the hoopla of the Olympics. She makes loud, funny noises when a skater completes a triple axel jump on the ice, and she’s empathetic when they don’t—doesn’t matter if they’re Russian or Israeli. Me? I like to observe them closely, read their facial expressions and body language, scrutinize their “on camera” comments—learn from them.

Champion athletes practice and rehearse with a head full of fear and resistance just like any other artist or entrepreneur. And you can bet that the beast of doubt is standing right there in the starting block, toe-to-toe with the champ, attempting one last ditch effort to induce a choke. However, when the flag goes up and the start-gun “BANGS,” that desperate, maddening inner chatter is immediately drowned to death by the deafening sounds of sweet silence. No thoughts, just the work. Only the work. The work itself has consumed and devoured the doubt & fear and replaced it with the deepest meditation. Nothing else exists while the task is being performed. The skater becomes the ice, the artist becomes the art, the musician becomes the music, the writer becomes the words, the CEO becomes the risk. It’s like the work itself takes up the space where the chatter was, and a certain respectful reverence occurs—like Divinity herself just entered the space. That’s what happens when pure, poetic perfection merges with riveted, ruthless commitment. Resigned, like the “Terminator” pledged to carry out only one task. And while others watch in amazement, the champion athlete, the crazy artist and the genius entrepreneur slip into that “still zone,” and confidently dazzle us with their extraordinary, jaw dropping contribution.
“Work hard in silence and let success be your noise” — Natalie Van Coevorden- Australian Triathlete