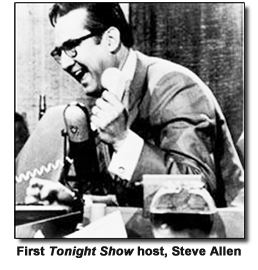 My awesome wife and I used to live up the street from Steve Allen in Encino, Ca. I never saw him much in the neighborhood but I did hook up with him at the “California Wok,” a local Chinese take-out restaurant on Ventura Blvd. Many times I would go in to pick up our food and Steve would be sitting there by himself, waiting for his take-out order. Each time I saw him I said hello and reminded him that I was a neighbor. His glory days in the spotlight were over, and he had suddenly gotten noticeably older.

One time I struck up a conversation with him about television. I told him that I once had a gig at CBS working the Sunday Night News. He told me about some of the battles he had with the NBC brass regarding his “cutting-edge” show (he was the very first host of the Tonight Show). He also told me that in the early days of television there was so much opportunity for writers, performers, musicians, and anyone with a little talent and big ideas. But he said most creative people at the time were hard up to make a buck, and reluctant to take a chance on the new technology of TV. They really didn’t understand it, and doubted it’s validity, so many stayed in radio as long as they could. He added, “but the truth is, all you needed was a blue shirt and a tie and you could get your own TV show!”

I think its very similar today—well maybe not the tie.

Once again, we’re on the very cutting edge of the transformation of television—better said “video.” At this writing, what we watch, when we watch, how we watch, and what we watch it on is slowly morphing into something very different. And I think 2015 is the year we can finally say goodbye to cable subscriptions (Comcast & Time Warner), and embrace the arrival of “online television.”

That said, along with the ability to watch video content on any device, anytime, anywhere, there has also been a Godzilla rise of original programming in the past few years from production studios like Amazon and Netflix. Even the Huffington Post has a weekly “satirical” news show on their website, and “BuzzFeed Motion Pictures” (a division of BuzzFeed media) recently announced that its videos have accumulated 1 billion monthly views. See Los Angeles Times article.

What that means for you is that opportunities for more original, visual “multi-device” programming, including innovative music videos, webinars, TED type talks, reality shows, sit-coms, short-films, documentaries, and original YouTube type shows, is about to explode. And the after-shock will blast open the windows of opportunity for any showbiz-savvy creative artist or entrepreneur who has the talent (and the courage) to make the leap, including; writers, composers, actors, directors, film makers, publishers—even support staff and location crews.

In his book, Outliers, Malcolm Gladwell said, “Success is not a random act. It arises out of a predictable and powerful set of circumstances and opportunities. And those who seize those “uncertain” opportunities are often the ones who reach the very top of the mountain.”

Anyone can produce video content now and in fact, almost everyone does. And I think that the extraordinary opportunities that are now available in the new “visual medium” belong to anyone who can create and publish compelling visual content, which appeals to not just an “age bracket,” but rather a specific audience for a specific outcome. According to marketing expert Seth Godin, “A video or streaming show won’t work because everyone watches it. It will work because the right people watch it for the right reason.”

That said, I just wanted you to be aware and vigilant of the open windows of opportunity in the world of television, movies, and original video “Internet programming” today. I also encourage you to take a close look at the great ideas and unique talents that you have to offer to this growing sector of the entertainment industry, and research a few of those opportunities & possibilities for yourself.