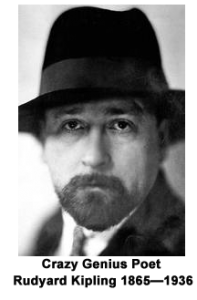 I first found out I was crazy when I discovered I couldn’t stop the constant stream of impossible dreams, crazy fantasies and unlimited possibilities frolicking around between my ears. It began when Sister Thomas Francis dragged me out of math class, marched me down the hall to an all girls’ English lit class and insisted I stand in front of the room and read the Kipling poem, Gunga Din in my best English accent. (She overheard me singing Beatle songs (with an English accent) in the cafeteria and was impressed.) I loved it! After that incident, my confidence kicked up a notch. I joined a theater group, started a rock band, accepted my dads offer to work in the movie studios, and thus sealed my destiny in showbiz forever. And out of that excitement and enthusiasm about knowing exactly what I wanted to do with the rest of my life the download began; a relentless stream of crazy ideas, outrageous desires and impossible dreams that has never stopped.

Same thing happened to you (and all artists & entrepreneurs). Perhaps not inspired by the great Rudyard Kipling, but something profoundly influenced your destiny way back in the day—a song, a movie, a book, a teacher, an incident, that changed everything and opened the unceasing floodgates of unlimited possibilities. From the moment you (inwardly) committed to an independent, entrepreneurial life of creativity, the download began. A free-flowing, non-stop stream of ideas, thoughts, inspirations, brainstorms, videos, music, rhymes, lyrics, beats, money-making schemes, frightening visions of the future, light bulbs over the head and sudden bursts of intuition delivered directly from the divine field of all possibilities—that has never stopped and never will. Others may view it as scattered and unfocused. That’s because they don’t get it! They’re the ones who ask, “where did you get that idea?” How did you come up with those lyrics?” What possessed you to start your own business?” You’re crazy because while others struggle for the right answers, you’re content living in a world of endless possibilities, and people just don’t get that. Not even your therapist gets it—unless she’s crazy too! The truth is, only other crazy artists & entrepreneurs really understand.

You’re crazy because deep down inside, you know that being an artist, an entrepreneur, is much more than a simple calling or a chosen vocation. It’s in fact, a never-ending “monster mission” that must be pursued with ruthless intention, rigorous enthusiasm, reckless abandon, and too often, irresponsibility. It’s a life that was independently chosen—by you, and it’s impossible for you to be whole or complete doing anything else.

Being an artist or an entrepreneur doesn’t mean you’re better, smarter, funnier, prettier, wiser or richer. It just means that you chose the way of the lone pioneer. And while others believe that politicians lead the way, it’s really the artists and entrepreneurs of the world that we all look up to, admire, praise, emulate and follow.

Stop questioning and doubting your sanity, and finally give yourself permission to be the crazy, creative genius that you are—no matter what others think! You’ve been granted the gift of independent thinking and an unstoppable flood of innovative ideas. And the only thing missing, that may be preventing you from realizing more of the fruits of your creative endeavors, are courage and confidence. The courage to go after your impossible dreams and the confidence to believe you’ll succeed.

Tho’ I’ve belted you and flayed you,
By the livin’ Gawd that made you,
You’re a better man than I am, Gunga Din!
— Rudyard Kipling